Drumshanbo is a pretty town situated at the foot of Sliabh an Iarainn mountain and is the heart of traditional music in the area. Its position at the southern end of Lough Allen makes it a prized angling resort. The surrounding area is mountainous and hilly and there are excellent marked trails for walking enthusiasts, some of which are suitable for cyclists. 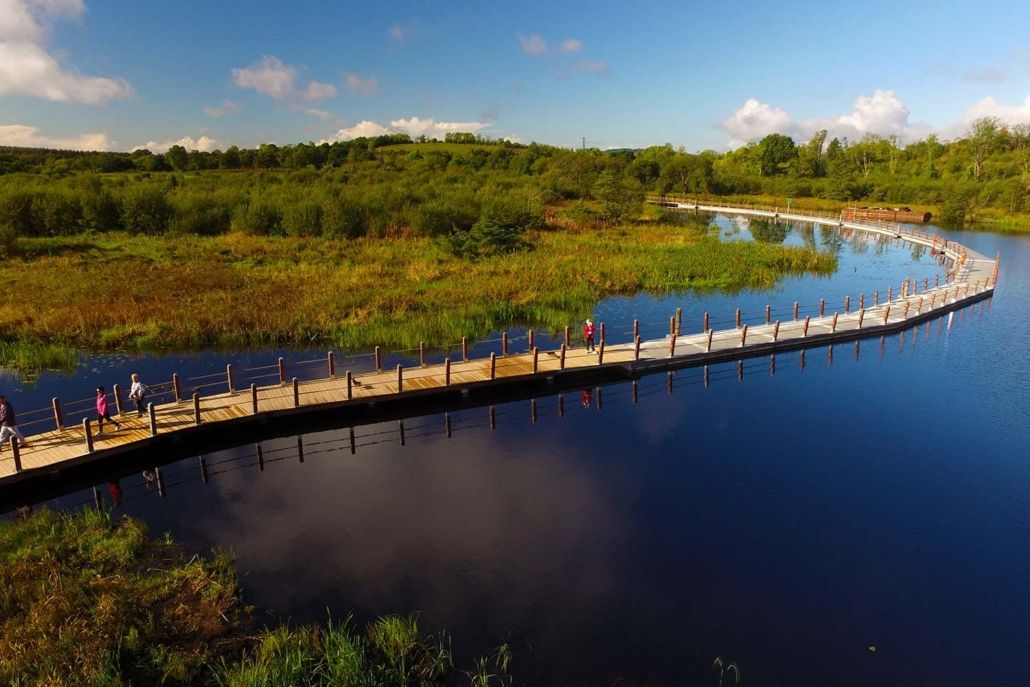 Drumshanbo marks the start of the Shannon Blueway and Acres Lake is home to Ireland’s first floating boardwalk. The 600m boardwalk extends over the lake and is part of a 6.5 km linear walking and cycling trail from Acres Lake in Drumshanbo to Battlebridge Lock, near Leitrim Village.

Every July Drumshanbo plays host to the award winning Joe Mooney Summer School, a week-long festival of traditional Irish music, song and dance named after the man who did so much to promote Leitrim and his beloved town.

Drumshanbo is also the only remaining town in Ireland to still celebrate An Tóstal, a festival inaugurated all over Ireland in 1953, as a celebration for Irish life. The week long family fun festival is full of a variety of activities and entertainment. There is a mix of on-street entertainment, indoor and outdoor activities, water activities and the ever popular Stylish Silage competition which attracts hundreds of people to Drumshanbo during the festival week to view the locals creative displays.

An interesting point of interest in Drumshanbo is its unique High Street fronted by a stone wall and steps that lead down to Ireland’s shortest Main Street. St John’s Church of Ireland – A gothic structure that dates back to 1829.

The old pre-emancipation Church of Murhaun which stood in 1744, before St Patrick’s Church was built in 1851 closer to the village, was attached to a graveyard, known as the Famine Graveyard. Some 500 victims of the Great Famine (An Gorta Mor – 1845/47) are thought to have been buried here.

At Blackrock there are boat facilities that allow access to Lough Allen from the Canal. Crannogs, an ancient fortified dwelling constructed in a lake or marsh, can be seen in Lough Allen when water levels are low. Crannogs consist of stones arranged in oval and circular shapes in a raised formation off the shoreline.

Things to do and see in the Drumshanbo area:

To find more places to go, things to do and places to stay or eat near to where you are visiting, this handy map will help you to plan your trip.