Salmon fishing opens on January 1st on a handful of rivers and after that the remainder of rivers on various dates in February, March, April and May. The majority of rivers close on September 30th, but some rivers remain open for sea trout fishing until October 12th. Game fish species include wild salmon, grilse, sea trout and brown trout.

Game angling in Leitrim requires a licence which can be purchased online from https://store.fishinginireland.info/

Manorhamilton is a friendly, peaceful and picturesque village situated in the centre of the North Leitrim Glens region.

Drumcliffe River, Glencar Lake and 14km of the Bonet River are the most popular waters in this area. The river and lake enjoy reasonable runs of salmon and sea trout. The best months for these species are July, August and September.

Fishing on these waters is controlled by Sligo and Manorhamilton Angling Associations and permits can be obtained locally.

There are boats available for use by visiting anglers on Glencar Lake.

Drumshanbo is a pretty village situated at the foot of Sliabh an Iarainn mountain. Its position at the southern end of Lough Allen makes it a prized angling resort.

Lough Melvin is one of the most important salmon and trout fisheries in the North West of Ireland. Famous for its unusual and rare species of trout such as gillaroo, ferox and sonaghan, the lake also holds salmon char and perch.

The Lough Melvin catchment drains an area of 265km2, 42% of which lies within Northern Ireland and is situated within the counties Leitrim (ROI) and Fermanagh (NI). Lough Melvin is 13km long from east to west and 3km wide.

There is good public access to the lake with piers at Kinlough, Breffni and Dernaseer.

The Southeastern quarter of the lough i.e. Rossinver Bay and the Roosky shore constitute the Rossinver fishery. Rossinver Bay, which comprises the red buoy on the eastern side of Ross Point to the similar buoy at the Southern end of Roosky shore, is strictly fly only. The area inshore of the marker buoys from Ross point to the Border is fly only from the 15th May to the end of the season.Trout fishing starts in earnest around early June. Gillaroo can be caught along the rocky shores. Trout less than 11 inches must be returned. Further information is available at www.rossinver-fishery.com 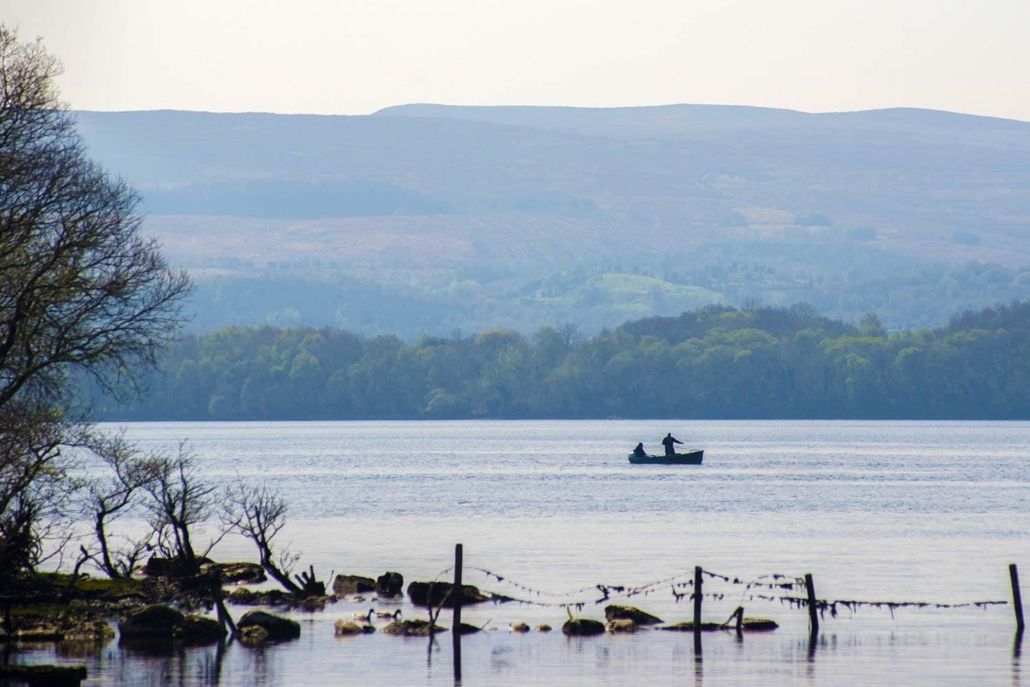 Lough Gill is a large lough, nearly 6½ miles long from east to west and 2½ miles wide at its widest point. Few loughs have a reputation for having salmon as the predominant angling species and this is one of them.

It lies about 3 miles east of Sligo and the R286 Dromahair – Sligo road runs close by the shore on the northern end and the R287 on the southern side. There is public access and parking at Inisfree, Shriff Bay, Aughamore and Hazelwood Bay.

This lough holds brown trout and salmon. It gets a big run of spring salmon and anglers are out from opening day. Most of the fishing is done by trolling. February and March are regarded as good months and so also is May, but after that the salmon fishing is over for the season.

Fishing on these waters is controlled by Sligo and Manorhamilton Angling Associations and permits can be obtained locally.

Lough Doon is situated north of Lough Gill between Sligo and Dromahair.

It covers fourteen hectares and holds a large stock of nice quality brown trout up to 14 ins. (35.5 cm.) in length.

Permits are required and are available locally. Boats are normally available for hire