Nestling in the Glenade Valley (from the Irish “Glen of Jealousy”), Glenade Lake sits amid spectacular scenery, within sight of the towering peaks of the Dartry range of mountains.

Glenade Valley is seen as one of the finest examples of a glacial valley in Europe and in Pol na mBear, a cave in the valley, remains of Ireland’s last brown bears were discovered in 1997. DNA results on the bones have indicated that these bears were the maternal ancestors of the modern polar bear. 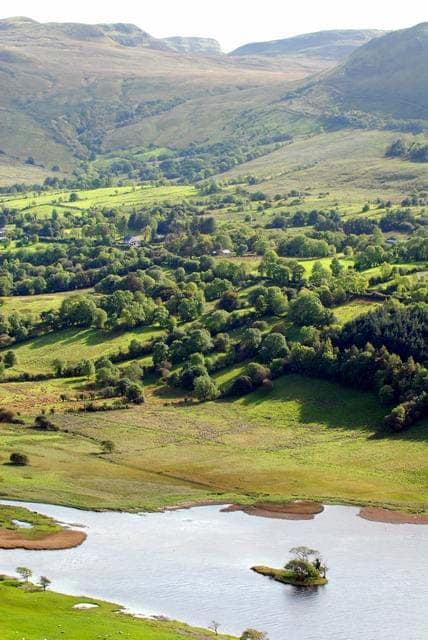 Glenade Lake is associated with a local legend of a monster, called the Dobhar Chú or water dog, which is said to have lived in the lake. The legend has been immortalised in poetry which tells the story of the Dobhar Chú (pronounced “Dowarcoo”) which, together with its mate, emerged from the depths of the lake centuries ago to bestow tragedy on the local area.

‘By Glenade lake tradition tells, two hundred years ago
A thrilling scene enacted was to which, as years unflow,
Old men and women still relate, and while relating dread,
Some demon of its kind may yet be found within its bed.
Anon

At the nearby ancient graveyard, Conwell Cemetery, a stone carving of the Dobhar Chú can be seen.

There is a car park and viewing area at the southern end of the lake from where you can really take in the sheer size of this glacial lake.

The 8km Arroo Trail starts at the Aghanlish Community Centre in the beautiful Glenade Valley and has stunning views of Arroo Mountain, Keelogyboy, Truskmore and out to Mullaghmore.